The glory of Google Maps is how you can conduct a tour through areas you are about to drive around and learn the lay of the land.  I tend to do that out of habit now as plan out which hotels to take, figure out what to expect, etc.  The value to me is being able to relax a bit during a drive and not face last second choices in navigation.  My phone pulled double duty this past January during my cruise on Oasis of the Seas.  Mounted just under the rear-view mirror, I kept the video camera rolling as I drove through downtown Atlanta.  Always a busy highway, the drive was smooth enough until some concert letting out flooded the south side exits along I-75. 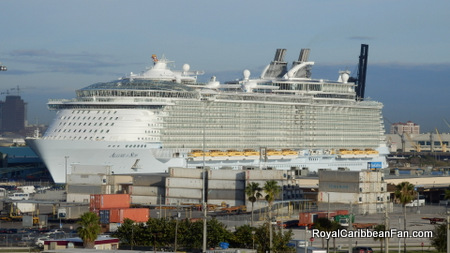 June 18th, 2008, Royal Caribbean revealed more news related to the design of Oasis of the Seas today, not long after Norwiegian Cruise Lines did the same about their "F3" class of ships.

From the RCCL Press Release:

MIAMI, June 18 /PRNewswire-FirstCall/ -- Steeped in a philosophy that innovation and imagination contribute to a remarkable cruise vacation, Royal Caribbean has once again raised the bar with the announcement of the latest amenities on its newest ship, Oasis of the Seas. Launching in late 2009, Oasis of the Seas will be the world's largest and most revolutionary ship introducing the cruise line's new neighborhood concept, which will provide vacationers with the opportunity to seek out relevant experiences based on their personal styles, preferences or moods. Boardwalk will be a breathtaking space for families inspired by the nostalgic seaside piers of yesteryear; the first amphitheater at sea, AquaTheater, will celebrate water with the largest freshwater pool found on a ship offering a full spectrum of activities and performances for guests; and the urban living concept will take to the high seas with the introduction of industry-first loft suites offering expansive ocean views and luxury amenities. Enhancements to the cruise line's signature Royal Promenade will include a new design allowing guests to have a physical connection with the neighborhood above, Central Park, as natural light cascades down from the sky through the Crystal Canopy sculptured glass domes. Other surprises include two rock-climbing walls and the first zip-line at sea suspended nine decks above Boardwalk. 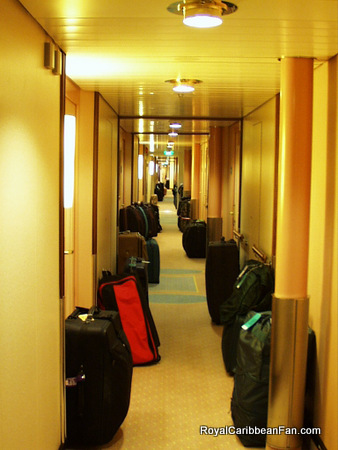 Sovereign of the Seas 1999 - However, I digress (Royal Caribbean Fan)

After embarking on Deck 4, I walked through the hallways leading to my cabin. This is the main staircase area and elevator bay. The crew members are not supposed to use the elevators, but you can catch one or two now and then. Sometimes it seemed like the elevators were next to useless, since they seemed to take so long to arrive.

The hallways are not exactly wide, but easy to navigate.

While not large, the cabins are fine for a short cruise such as the one I took. The cabins are made up twice a day. When you leave for the start of the day, your cabin steward makes up the beds, changes the liens, and tidies your things. When you leave for dinner, they then make up the beds for the night, so the next thing you know, they are ready for bed. The mark of a good cabin steward is said to be if you never notice him. I seem to have had a good one by that standard!  The bathrooms are compact but very functional. I'd have taken better photos, but then I couldn't get into any angle to photograph it all!

The desk, closet, and phone. I didn't touch any of the drinks, although I did take a bottle of water as I left the cabin. Evidently they either didn't notice or don't seem to be able to charge you for that! The closet space is a bit small for much more than a four day cruise. The lack of electrical outlets was a bit frustrating. But on the whole, I was more than comfortable in my cabin.

The Grandeur of the Seas spotted a capsized vessel while operating off the east coast Friday morning.  The man, whose private boat had overturned two days prior, was not seen by the crew at the distance they were to the boat. However, they reported the sighting immediately to the U.S. Coast Guard, which dispatched a C-130 airplane, which located the man. A Coast Guard helicopter later lifted the man from the water, and he is expected to suffer no lasting consequences.