Costa to Build Two for China 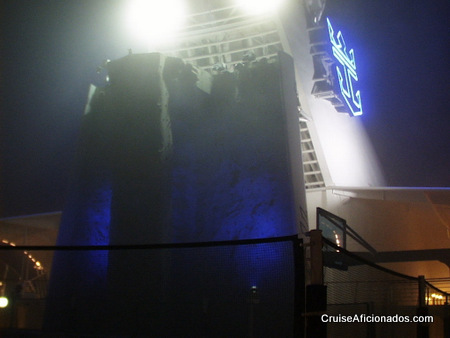 The countdown app on my smartphone has reached 100 days until my next cruise.  For the first time I am taking family with me as my young daughter and son will come with me to cruise on Royal Caribbean’s Oasis of the Seas.  This will be a return visit to the Oasis having sailed on her just this past January.  It will also be the first major family trip for my “little people.”  My hope is to make this the start of lasting tradition. Adventures like long trips across the country and memory building were constant parts of my growing up.  So there this is an event that means more to me than just another cruise.

This cruise will unfold very much like my last few cruises in that I’ll be driving from Ohio down to Florida, cruising, then returning north the way I came.  If the nature of flying is as bad as I read nearly every day there isn’t much to be missed by driving.  The itinerary will see Oasis visit St. Marteen, St. Thomas and Nassau, with a few days at sea.  I have a particular interest in seeing if I can take the kids to the Atlantis resort, possibly to see Dolphins-which my daughter told me I’m obliged to produce on this trip.  St. Marteen will require a visit to “The Yoda Guy,” which my son is especially keen to see.  This will be my first cruise in the month of October as well.  Normally I find my way to sea in January or August.  There won’t be anything dramatically different but the Hurricane season will still be underway.  Always the chance for a bit of extra adventure at such times.

I’m looking forward to sharing with folks new to my Royal Caribbean Fan blog and Cruise Aficionados in the months leading to the event.  If there is anything I enjoy nearly as much as being on a cruise is reliving a small part the trips I’ve taken in the past.  Every blog entry, podcast, or occasion I have to talk about cruising makes the itch to do it again stronger.  If you visit  in the coming months I know you’ll find yourself feeling the same as I do.

After several years of speculation Royal Caribbean Cruises Ltd. announced today that it had entered into an agreement with Miami-Dade County to build a 170,000 square foot terminal at the Port Miami.

While some had believed Royal Caribbean would built at the northwestern or southwestern sections it was revealed the location is at the south east corner of Dodge Island.

Dubbed the "Crown of Miami," the complex will host not only the passenger terminal but also a parking structure.  Designed to accommodate ships up to the record breaking size of the Oasis class, the terminal will be part of a resurgence of Royal Caribbean ships at Port Miami.  In recent years all but the most rare itinerary in Florida would depart from Port Everglades in nearby Fort Lauderdale.  With competing local interests seeking to build mixed use retail, sports and convention space on Dodge Island, this move should do much to secure the future of the port for cruise travel and prompt even more development nearby.

Long-time cruises will find the location of the Crown of Miami amusing given the historic rivalry between Royal Caribbean and Carnival.  Carnival ships are well known to make any and all efforts to depart their ports prior to Royal Caribbean ships.  In the case of Port Miami, this usually meant watching two or more of the lines ships departing prior to those of the "crown and anchor."  It figures that Royal Caribbean will more than happily allow their rivals to pass by the mind blowing ships of the Oasis, Voyager, Freedom, and Quantum classes as they leave.

Though Port Miami has improved greatly over the decades returning cruisers will find the new terminal to be unique even compared to the best of breed, Terminal 18 at Port Everglades.  Wide walkways, huge windows, Miami style lighting at night, the act of boarding the ship will feel more like part of the cruise itself.....almost.

Also announced was the planned addition of an 20,000 square foot innovation lab at the Royal Caribbean headquarters building which is also located at Dodge Island.  The lab will be used to continue design work on the lines ever evolving fleet of cutting edge ships. 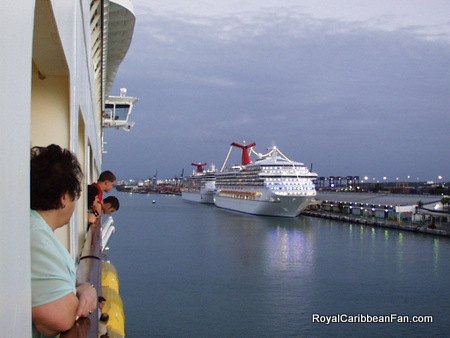 Every cruise has several moments you never forget.  Departure is among those moments.  Starting at about 5 p.m., the assembled cruise ships cast-off, and each begins a run down “Government Cut.”  Government Cut is the channel leading to open water.  Nearest to the Miami Heat's stadium, is the turning basin.  Since there isn't enough room for ships to turn-around, they do so in the basin.  Often, Royal Caribbean ships will turn around before docking the night before.

By long tradition, passengers gather and are encouraged to visit the upper decks.  Although they no longer throw confetti as you might see on Love Boat reruns or in the movies, it is still a festive time.  The cameras are always out in force, a ship's band rounds out the Caribbean themed music, drinks are being sold at every corner of the ship, and the excitement on board builds.The ships make their way, under the control of a harbor pilot, towards open water.  At the Port of Miami, you get to view some of the most expensive real estate in the country to the north, but you'll notice as ships leave port, there is a lot of fresh paint on the docks. The crews that paint the hull while vessels are in port tend to leave their calling-cards along the normally unseen space along the water.

Early dining often causes people to leave the deck party above.  Some ships will wisely delay the first seating to allow people to fully enjoy departure.  Were it not such a thing to not be missed, I personally would love to simply stay on deck sometime.

Some of the more interesting sights are noted in the illustration below.