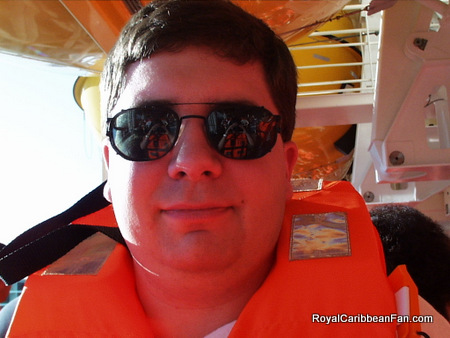 Before any passenger ship can leave a US port, it must conduct a boat drill. This is a direct result of the Titanic disaster. I was assigned to Muster Station number 9, which was located inside the Finian's Rainbow Lounge. Some folks checked in as they walked into the muster station, which thankfully saved time. The crew would call off each  cabin, and a person from that cabin would reply in the number of people in that berth. Following the drill, the passengers scrambled back to their cabins to either get ready for dinner, or to drop their life jackets off before going up on deck.  When you take a cruise, know that you can't skip the boat drill, and don't try.  You truly don't want to be the last person walking to the muster station with flocks of people staring daggers at you.

And yes, people talk about Titanic the entire time the drill is happening.