People Watching on the Oasis of the Seas

People watching.  We all do it.  On a cruise everybody has a story, even if they don't post online about it.  (Like you should in our message boards!)  For my money, next to the sunsets and watching the water and ships, people are the most interesting thing to do many nights.  On Oasis of the Seas these past two cruises, I've tucked myself in defilade with a Coconut Ranger Cookie or slice of pizza, a bit of ice tea and "people watch."

Formal nights are the best for this passive activity.  Those nights above all others, you get to see folks as they'd like to see themselves.  The formal outfits, old party dress', and those non-conformists who just slum in any old thing.  Added to the mix are a legion of photographers, who seek to entice you to get your photo taken.  You'll notice that more and more the public spaces become rigged with lines and rope fences to either guide people closer to photographers or protect choice locations from being invaded as they are used in pictures.  In truth folks line-up for these photo-ops.  With digital media, online sharing options and the lower cost of non-film based photos, the lines are able to offer a lot more for the money.  People clearly respond as well.

To traditionalists lament the lack of wide adherence to a single dress standard it does underscore that folks are free to do as they wish onboard.

The Germans and Italians will be whipping up far more than kraut and pasta as Carnival’s nine ship order starts into motion at the Meyer Werft and Fincantieri yards.  The lot of ships, including a rare, little detailed new design for Carnival are due to start coming online between 2019 and 2022.  The new tonnage will replace at least seven older ships leaving service during the next three years.  The newer ships will be larger than those they likely replace, leading to higher efficiency in operating costs and will likewise boast the latest features not possible on their predecessors.  The dip in overall capacity should also aid in stiffening prices in the traditional Caribbean market while the new ships will command a higher per diem when they come online.  What comes of the retire cruise ships is unknown.  While it is likely some will find service in other lines the age and size of the most likely candidates would suggest the scrap yard for at least a few. 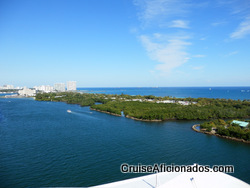 Fred. Olsen Cruise Lines’ “Black Watch” began itineraries from Liverpool at the close of March.  Itineraries range from thirteen to eighteen days with destinations including Dublin and the Canary Islands.  “This year, the City of Liverpool will welcome our most iconic ship, Black Watch, to its shores, and we look forward to receiving the same warm reception from the people of Merseyside as her sister ship, Boudicca, has experienced over the past two years. With its stunning vistas and proud maritime heritage, there is something very special about cruising from Liverpool, and it is a tremendous benefit to be able to offer our guests the chance to set sail from the world-famous Pier Head” said Nathan Philpot, sales and marketing director for the line.

To begin, one has to know some things about Fred. Olsen Cruise Lines.  They are a subsidiary of the Fred.Olsen Group, founded in 1848.  They are based in the UK, owned by the founding family of Norwegians.  The same company owns Timex and is involved in off shore oil drilling, air travel and tanker ships.  However they have over a century of heritage in passenger travel and are among the oldest companies still plying the trade as a cruise line.  They boast only four ships at present, all would be considered “classic” in their design.  In lay terms, this means most of these ships have fewer than 2,000 passengers and were built in the late 1980s through mid-1990s.  Well maintained and highly respected they carry names long known to the venerable line such as “Black Watch” and “Balmoral.”   So as one watches news and announcements from Fred.Olsen realize that this is a small and unique line.