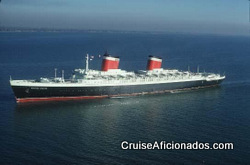 Other travelers take their dogs with them on the voyages rather than be apart from their companions, be it transatlantic crossings or Cunard’s famous around the world itineraries.  What I found most interesting was that the fees to lodge one’s dog in a kennel is not exceedingly high, only five to seven hundred dollars.

Visit the dog channel and read more about it, even if you would never sail with a four legged friend it is interesting all the same!