Watching from a ship as it departs is a favorite of many cruisers.  For those rare birds able to rise early, watching as one's ship arrives in a port can be something special.  In this case we split the difference and enjoy watching the Norwegian Gem as she enters the Bay of San Juan.  Seen from the aft deck of the Royal Caribbean ship Independence of the Seas, she sails quickly to dock.

Enjoy the bit of cruising?  Join us here at Cruise Aficionados!  Share your own cruise, port, shopping and even hotel reviews.  Learn or share about cruising in our forums.  Make cruising part of every day!  When you can't be onboard, be online! 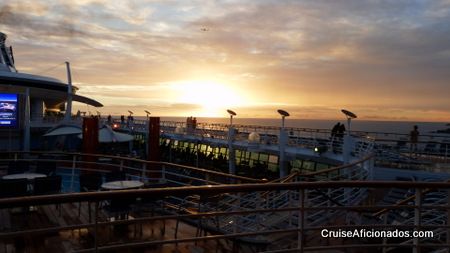 By three methods we may book staterooms: First, with balcony, which is the coolest; second by sea view, which is ok; and third by inside stateroom, which is frugalist. - Cruisefucius