This historic SS United States will have a new owner and more remarkably could return to service after more than 40 years of waiting.  Crystal Cruises has taken out an option to buy the ship with the intent being to renovate the vintage ocean liner and Blue Riband holder.  Hurdles remain however as the ship will require hundreds of millions in work and years of effort to ply the seas again.

Tobago Becomes a Turn Around Point for Cruises. 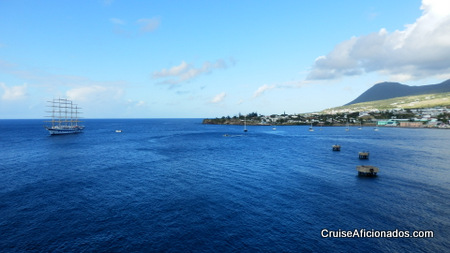 Less than a year after hosting a major industry conference, the island of Tobago is expecting substantial growth in the number of cruise passengers.

“Between April and October there is very little activity on the island as far as the cruise business is concerned.” Samuel Henry, Transportation Coordinator, Tobago Division of Tourism and Travel commented to The Tabago News.  The division expects nearly 90,000 cruisers spread across fifty-four port calls.  A 67% increase year-over-year.

The island hosted a regional cruise conference in 2015 and appears to have benefited greatly from it.  The cruise port at Scarborough is best known as a launching point for excursions as opposed to shopping.  As a cruise port it does not yet feature the same walk-off-shopping centers seen at many eastern and western Caribbean ports these days.