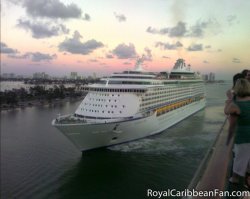 Region
Western Caribbean
Date of cruise
January 06, 2007
Cruise length
7
Port of Departure
Port of Miami
Fly or drive to your cruise?
Drove to port city.
Cruise Overview
In January 2007 I took my first cruise in a few years after work and family had settled down. I choose Navigator of the Seas, which through friends I had the opportunity to know was being mastered by Captain Leif Otto Bang. His wife Darlene was aboard with him.

The Voyager class is comprised of five ships. Navigator was the fourth unit built. Not only that Captain Bang had himself overseen her construction. She follows the same basic design all ships in her class share. However unlike the Voyager, Adventure and Explorer of the Seas, her balconies are hung outside of the main hull. This didn’t lead to any additional space within the ship but allows for more crew access.

Navigator of the Seas departed out of Port Miami. I drove as is my habit and I found parking and embarkation little changed from Explorer of the Seas a few years prior. Sadly I didn’t have the service of my usual digital camera and learned the hard way that my 2006 model “smartphone” had a poor performing camera.

I had the chance to connect with Darlene at a couple of receptions for different groups. A more traditional and gracious host I couldn’t describe. Shortly before the ship departed Ocho Rios I was given the opportunity to observe the process from the bridge itself. Watching the Captain and officers in action was highly impressive. After the ship was at sea the Bang’s played host in their cabin. I had the chance to share over an hour discussing everything from family to captain Bang’s career. It was already clear from the first few days aboard the ship that his crew held him in very high regard. From dining to the ship’s stores it seemed everybody knew him and had a good word to share about him. It was the first time on a ship that I could see how a captain makes a very real difference in the quality of a cruise. Taking the time to entertain somebody known to them only by friends was flattering and an honor. Likewise as somebody with a deep and keen interest in all things aboard ship the insights and time “behind the scenes” were memories I’ll keep a lifetime. I hope someday to be able to return the favor in some small way.

The ship was without question the cleanest and most sharply kept I’ve sailed on before or since. The ship itself seems to carry a solid reputation even to this day and I would credit much of that to Captain Bang, from his oversight of the ship's construction to having set a high standard aboard her in her earliest days of operation.