Airbus to end A380 production with final delivery to Emirates in 2021. 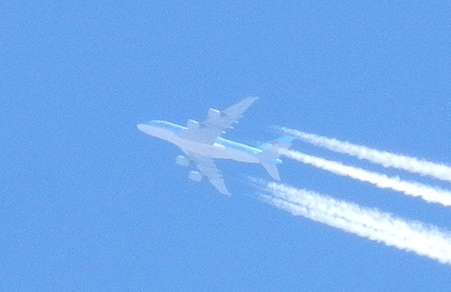 A Korean Airways A380 over Grand Rapids, Ohio in 2013. (Nathan Boyle, Air Aficionados.)

Nearly three years without new orders, cancellations of most of the remaining backlog, a non-existent secondary  market and zero airline interest finally caught-up with the Airbus A380.  With this quarters financial performance numbers also came formal word that the Airbus A380 would cease production with the final delivery to Emirates Airlines.  Due for delivery in 2021 the bold super-jumbo jet remains a marvel of aviation and beloved by flyers.  However smaller twin-engine planes with equal or greater range and efficiencies, and not requiring heavy modifications to airports, have become the first choice of airlines.

Emirates operates over 153 A380s and has single-handedly kept the type in production for years.

The Norwegian Epic suffered a partial loss of power resulting in two stops in the British and U.S. Virgin Islands.  That's bad.  Worse was the attempt to dock in San Jaun as the ship made its way back to Florida.  The wind overcame two tugs and bow thrusters resulting in two mooring points being knocked over as their edges scrapped dents in the Epic's hull.  As seen in a growing number of Youtube videos recorded by passengers onboard the Norwegian Epic, Celebrity Edge and pier side the incident surely will be the highlighted sea story passengers on both ships tell for a very long time!  There were no injuries and the Epic completed the full seven day cruise save for the missed ports of call.  Predictably passengers were posting on social media demanding full refunds for their "ruined" vacations.  Norwegian offered 50% refunds for the trouble, which on any other such occasion would be generous at the least.  One of the very first things any travel agent tells you or that the fine print of every cruise contract states, ports of call are NOT guaranteed.  No ships services were compromised and the cruise was not cut short.  I don't know of any examples of full refunds being made in an instance such as this.